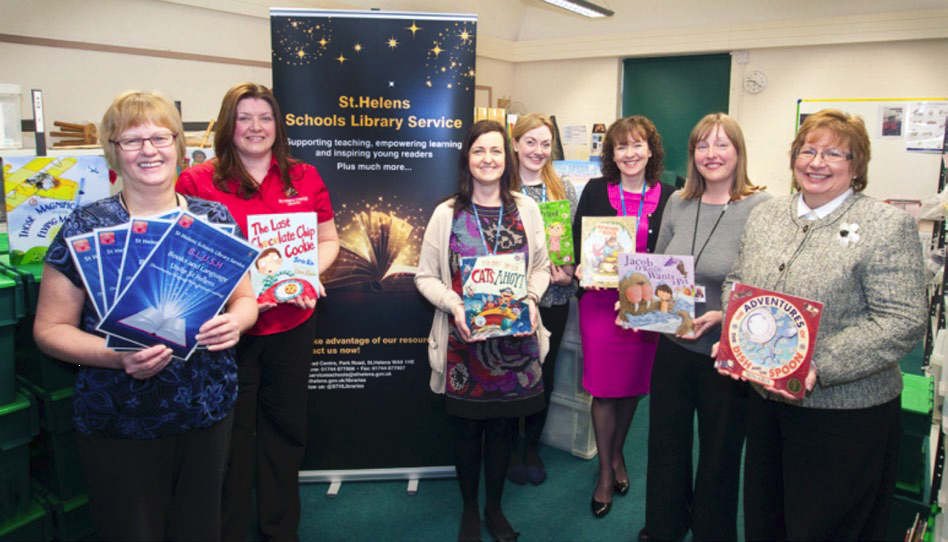 The Lost Boys’ a report published by Save The Children in July 2016 highlighted that there isn’t a single location in England where boys are outperforming girls in early language skills, or even coming close. And the report stated that the gender gap is at its most extreme in St. Helens, where boys start primary school over 17 percentage points behind their female peers.

The report outlined that if this deficit in language and communication skills is not addressed, it goes on to have a negative impact on the development of literacy skills and academic progress in general. BLUSH – Books and Language Unite in St Helens – was launched by the local school library service and Speech and Language Therapy Service to try and reverse the tide A Speech and Language Therapy Service and a Schools Library Service working together is quite unusual, but is actually the most natural thing in the world. St Helens Paediatric Speech and Language Service promote the development of oral speech, language and communication skills and St Helens Schools Library Service develops language and literacy skills via a reading for pleasure strategy. The two services have aims that overlap, as verbal language development can be facilitated through the medium of books by sharing pictures with a child or asking questions about each page or the whole story so children can make sense of what they have just read, and of course, so they enjoy reading! Both services were committed to working together to address this problem. The Schools Library Service, using their book expertise and knowledge, selected books by great authors with fantastic illustrations designed to encourage enjoyment of reading. The Speech and Language Therapy Service provided written question templates based upon these books using the BLANK Language Scheme.

Rose and Berlin, researchers in the late 1970’s, were interested in the complexity of questions and instructions that teachers used with the children they taught. They collected a large sample of questions and instructions from a group of teachers and then analysed these in terms of their language complexity. They were able to assign each question/instruction to one of four ‘Blank’ levels and developed their Blank Language Model as a result. In the model, the four Blank levels of questions range from Blank Level 1 questions, which are the simplest to process, to Blank Level 4 questions, which involve considerable linguistic processing ability and the ability to use verbal reasoning skills.

Therapists in the St Helens Paediatric Speech and Language Therapy service often use an assessment called the ‘Test of Abstract Language Comprehension’ to assess a child’s Blank level of understanding and this information forms part of a child’s therapy plan when there is a significant difficulty with language, typically where there has been a diagnosis of Developmental Language Disorder. BLUSH was initially launched in St Helens in 2016 targeting KS1. However, the need for BLUSH was soon identified at the Early Years level, with speech, language and communication difficulties presenting around the age of two. Going forward, BLUSH will be available up to secondary level, as language problems are prevalent across the age ranges in St Helens. Teachers and Early Years staff access BLUSH boxes via the Schools Library Service, which are free for members. Settings can purchase BLUSH if they don’t buy into the service. The boxes contain up to 20 age-appropriate books, some with Blank templates enclosed. The books not only support the therapy programmes of those who are known to the Speech and Language Therapy service, but can support language development universally for children in St Helens. Universal training on speech and language development was offered to all St Helens primary schools, Early Years settings and Library staff by Speech and Language Therapists. One of the key aims of the training was to enable staff to develop and ask children questions at the right level to support the child’s understanding of language as they look at books together, either on a one-to one basis or with a group of children. Teachers are encouraged to develop their own Blank templates based on the examples in the BLUSH boxes. Library staff use the skills learned on the training in improving the delivery of Read and Rhyme times in libraries.

BLUSH is used to assess a child’s level of language, support understanding at the child’s level as well as to facilitate development to the next level up of language complexity. The provision of the question templates in the BLUSH boxes has enabled teachers and early years staff to implement this soon after the training session, so as to maximise the embedding of learning into everyday practice.

The project is still being evaluated, but early feedback from teachers demonstrated that BLUSH has really helped them to put Blank into practice to support and develop children’s understanding in a way that they haven’t been able to before.

‘As we have a provision for ASD and MLD pupils, the BLUSH materials have been extremely useful in working with the children. Additionally, the Speech & Language Therapy Service also recommended use of the materials, which made it really meaningful and purposeful. At our school we have used BLUSH to assess pupils’ comprehension at different levels and use it to address speech and language targets. We have also used the questioning examples to work on questioning in other areas of their learning’ – Meena Viswanathan, SEN teacher, Rectory Primary

The partnership is paying dividends in terms of further work. Early Years support is of particular focus for both services, and future work is being planned around Speech and Language delivery from Libraries. This involves further improvements to Read and Rhyme times using the ASCEL (Association of Children’s and Education Librarians) quality toolkit, improving maternal mental health using techniques around pre-natal reading and singing and launching a new project, Empathy Lab, where books are used to instil empathy in children. It is an invaluable partnership that can only bring positive outcomes for the children of St Helens.